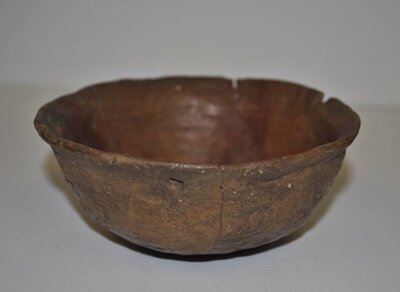 This shallow, flaring-rim bowl, only 5 inches in diameter, is made in a style of Mississippian pottery known as Carson Red on Buff (var. Olmond). This type of Mississippian pottery dates specifically to the Late Mississippian Period, and while it is closely related to the other major style of painted pottery that dates to this same time period, Nodena Red & White, Carson Red on Buff pottery has a much narrower geographical distribution: it appears to be restricted to roughly the northern half of the Lower Mississippi Valley.

As the name implies, Carson Red on Buff is characterized by the presence of heavy bands of thick, slip-like, red-colored paint that is applied directly onto the unslipped, buff-colored surface of the ceramic vessel. Jars are the most common vessel-shape among Carson Red on Buff pottery, making bowls like this one much more noteworthy. Furthermore, the fact that the painted decoration on this bowl appears on the interior of the bowl’s surface is a specific feature of the Olmond variation of the larger Carson Red on Buff type. Finally, although Carson Red on Buff decoration frequently employs think lines in linear designs, the intersecting, almost cross-like appearance of this specific decorative scheme is somewhat unusual.