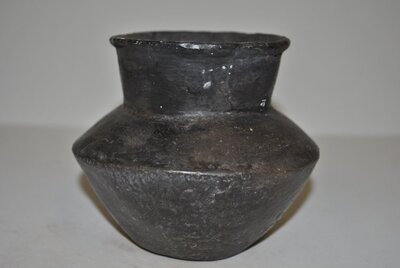 This bottle is an example of a style of pottery known as Bell Plain, var. Bell. Bell Plain ceramics are made with clay that is tempered with very fine shell fragments and tends to be a dark grey in color. Each vessel is formed by the coiling process: thin rolls of clay are used to build up the shape of the vessel around a flat base. The exterior and interior of the vessel are then smoothed, giving Bell Plain vessels a distinctively lustrous, almost soap-like appearance. This style of pottery was in use throughout the Mississippian period but was especially prevalent in the Middle and Late Mississippian periods, ca. This example in particular can be more specifically dated to the Walls Phase. Although bottles are among the most common of Bell Plain vessel forms, the almost angular - or carinated - body of this example is slightly less common. The medium-hight, slightly flaring neck and rounded lip, however, are both quite typical of Bell Plain style jars and bottles in general, although the rounded lip appears to be somewhat uncommon amongst the materials uncovered at Chucalissa specifically.