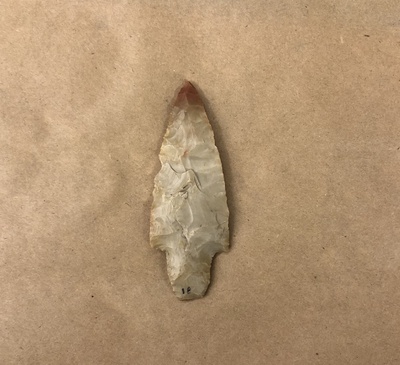 These points are created by means of both percussion and pressure flaking, which gives them a characteristic symmetrical appearance in all dimensions. Adena Stemmed Points have excurvate blade edges and well-formed stems that typically lack strong notches or indentations beneath the blades’ shoulders, giving the entire point a strongly lanceolate (or leaf-shaped) appearance. Both the stems and the haft regions of the points often show evidence of grinding on top of the original flaking. Adena Stemmed Points date to the Early Woodland Period, Adena lithic technology more broadly having originated during the preceding Late Archaic Period. These points are most commonly found in the Ohio River Valley, but they can also be found throughout much of eastern North America, from the Gulf Coast of Alabama through the Tennessee region and throughout the Great Lakes region from Wisconsin to New York.