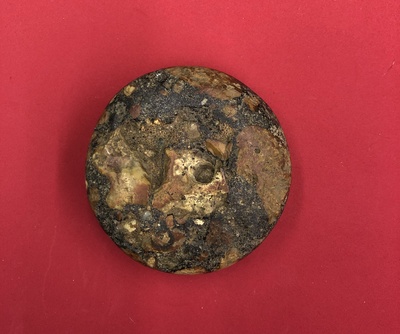 This large stone discoidal was being carefully shaped and polished to achieve a squat, cylindrical appearance: the smooth edges can be clearly seen along one side of the object, while the other side remains more rounded. It also has a small hole drilled only a few centimeters into one of its flat sides. Drilling a perfectly circular hole into a hard stone would have required the use of a specialized tool, for example a pump drill, and some skill at working with both drills and hard stones. The shallow hole visible on this stone disc is noticeably off-center, which was likely not the intent of the craftsperson! Presumably, the drilled hole was meant to be centered on the disc and would have completely transected the object if completed. Thus, the off-center position of the drilled hole may be the reason that work on this object was abandoned. While it is impossible to know for certain what this object would have been once finished its size and shape suggest that it could have been intended for a large chunkey stone, or perhaps more simply as some kind of weight, for example like the stone weights used in traditional pump-drills.