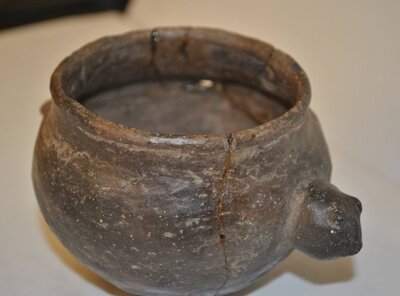 This jar - which has been more specifically dated to the Walls Phase of the Late Mississippian Period (ca. 1450 - 1550 CE) - is especially noteworthy because it’s an example of what archaeologists call a Structural Effigy Vessel. Simply put, this is a type of ceramic vessel which has been modeled to represent a three-dimensional figure: in this case, a turtle! The head and tail of the turtle have been modeled on either side of the bowl’s body, and the shape of the vessel naturally lends itself to a turtle’s squat, roughly round profile. Although the exact purpose of this vessel is uncertain, there is evidence that the turtle’s head likely served as a rattle, which very strongly suggests that this jar was made for a specifically ceremonial purpose. Furthermore, the natural association of turtles with water may have been symbolic of the Underworld, which was the water-filled, bottom-most layer of the universe’s three levels according to the religious tenets of the ancient Southeastern Ceremonial Complex.