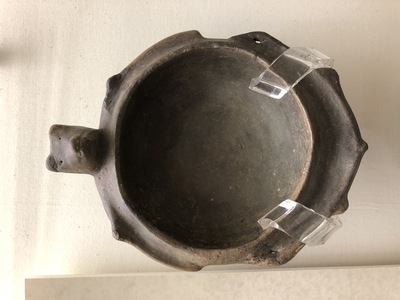 While bowl-shaped vessels are the most common form of Bell Plain pottery, bowls with modeled figures - or effigies - along the rims are less common than bowls with either no rim decoration or with simple incised rim decoration. Archaeological work at Chucalissa has uncovered quite a few of these remarkable Rim Effigy Bowls, like this one which depicts a bat: the bat’s head, wings, and tail are modeled in three-dimensions around the rim of the bowl. Bats often symbolized the Upperworld. According to the ancient religious beliefs common to this region, which we call the Southeastern Ceremonial Complex, the Upperworld of air was the top-most of the universe’s three levels. Although this type of bowl is most frequently found in funerary contexts, it seems likely that it would also have been used for other religious ceremonies for some time prior to its use as a funerary object.