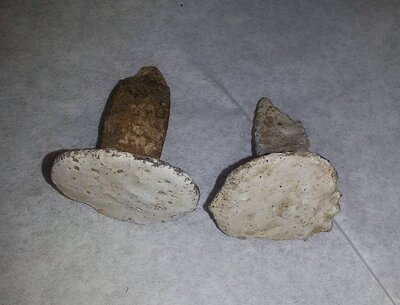 Because shell as a material is relatively hard but also often has a high shine, it was frequently used to create various objects for personal adornment, or which could be incorporated into different ornamental objects. While the larger, often engraved, shell pendants and gorgets are perhaps better known amongst ancient Mississippian material culture artifacts, smaller shells were just as frequently used to create beautiful ornamental objects like this pair of ear spools. Made from mussel shell, these ear spools feature an expanded circular section of shell with an almost glassy surface to sit against the outer ear lobe, with a narrower pin to transect the ear lobe. Although the back half of the pin on both ear plugs appears to have broken away, comparison with other known examples of Mississippian ear spools suggests it is possible that there was a slightly thickened ‘end’ to the pieces to help keep them in place once inserted through the ear lobe, that the pin itself may have extended at a downward curve to create a counterweight effect, or that there may even have been a separate, similarly expanded back piece that attached to the pin once it passed through the ear lobe.