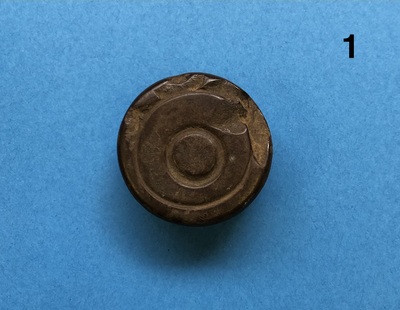 Made of hematite and measuring roughly 5 cm x 2 cm, this disc is an example of a chunky stone. Chunky was a sport / game which appears to have originated around the ancient Mississippian site of Cahokia (near modern-day St. Louis) and was quickly adopted and played throughout much of North America. Although there were quite a few variations of chunky which developed as it spread to new locations, the basic format of the game was as follows: disc-shaped stones like this one would be rolled along the playing field while players would throw spears towards the rolling stone(s), attempting to land the spear(s) as close as possible to the disc’s final stopped position. Far from being simply a game, however, chunky was also deeply symbolic. In fact, the figure of the chunky player was frequently depicted in the iconography of the ancient Southeastern Ceremonial Complex, where he was associated with (or perhaps an avatar of) the Birdman/falcon dancer/warrior figure, one of the most important - and frequently depicted - symbols within this ancient system of religious beliefs.