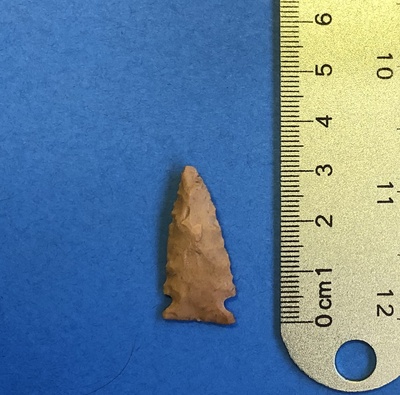 This medium-sized, thin, side-notched point is found throughout Tennessee and Alabama, and they date from the Late Woodland Period into the Early Mississippian Period. Averaging 4 - 6 cm in length, these points have either straight or excurvate (leaf-shaped) blades, and in at least one example the blade edges are finely serrated. The base (basal edge) of the point is flat and is often thinned, sometimes showing evidence of grinding as well. Knight Island points are initially shaped by a rough percussion flaking to remove broad, shallow flakes in a seemingly random pattern from both the blade and hafting area, and are then retouched by a fine, secondary flaking (which is also applied to the side notches). Originally named for Knight Island in the Wheeler Reservoir of the Tennessee River, Knight Island points are often found in association with other Late Woodland / Early Mississippian points, such as Jack’s Reef Points and Raccoon Notched Points.