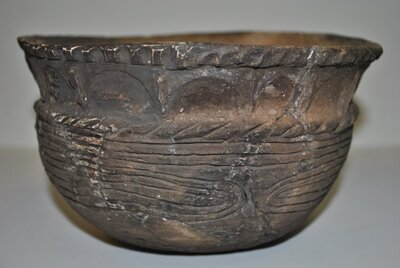 This jar, which was uncovered right here at Chucalissa, belongs to a type of Mississippian pottery known as Shelby Incised (var. unspecified). And although jars are arguably the most common vessel form among Mississippian pottery types, this one is remarkable for several reasons. First of all, its flaring rim gives it a somewhat unusual shape among Mississippian jars. Second, it displays several different types of decoration. The jar’s body, for instance, is covered with an incised decoration: the swirling pattern visible on the jar has been carved directly into the surface of the clay. The flaring rim has been decorated with a series of fifteen arcade handles that have been attached to the vessel through a process known as appliqué: the decoration was created by adding the clay needed for the arcade handles to an already-formed rim, rather than by taking clay away from the vessel (which is how the incised pattern on the body was formed). Third, the top of the jar’s body / base of the rim has been decorated with a cord-marked pattern. Lastly, the lip of the rim has been decorated with a scalloped pattern. While any one of these decorative techniques is not uncommon on Mississippian pottery, finding all of them represented on a single vessel is relatively unique!