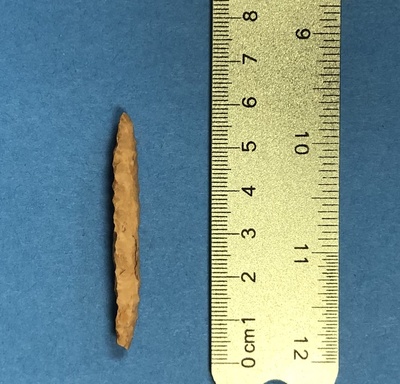 Beyond the basic function suggested by the name “drill”, these tools were also commonly used as perforators and awls for working with materials like wood, bone, and hide, for example. There is also some evidence that drills could potentially have been used as pins. As with many other types of lithic projectile points (arrowheads, for instance) drills are bifacially flaked stone tools whose edges were frequently retouched to provide the tool with sharper blade edges. Drills could take several different shapes, but characteristically they are quite narrow and slender, and are often quite small as well. Sometimes secondary flaking is evident on both top and bottom of a drill, suggesting that either side was could be used as the working edge of the tool. In other instances, however, only one end is worked to a blade edge while the other is unworked, or may show flattening for possible hafting. Some drill bases even have clear side-notches and stems, indicating that some drills at least were created through a re-working of an older stone projectile point (arrowheads, spearpoints, etc.).