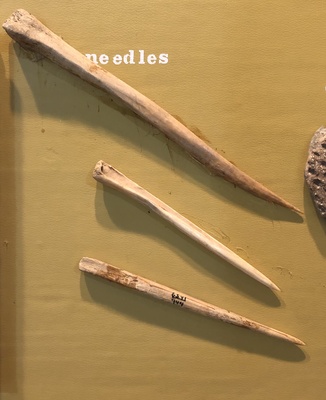 Bone as a material was frequently made into tools during the prehistoric period because it is both relatively durable and relatively easy to shape into the desired form, and needles are no exception. To create a needle, one end of a suitably-sized bone fragment would be narrowed and sharpened to create a point capable of perforating soft materials such as animal hide or plant-fiber textile. The other end of the needle would typically be barbed, so that a thread of sinew, plant-fiber, or another woven material could be attached to the needle. Most examples of prehistoric needles are unfortunately highly fragmentary, but surprisingly many of the prehistoric bone needles that have survived intact are quite a bit larger than their modern (metal) counterparts. Rather than indicating that small-sized needles were never created and/or used by prehistoric peoples, however, the preponderance of larger-than-expected needles is likely due to the fact that smaller examples simply did not survive long enough to be uncovered by modern archaeologists.