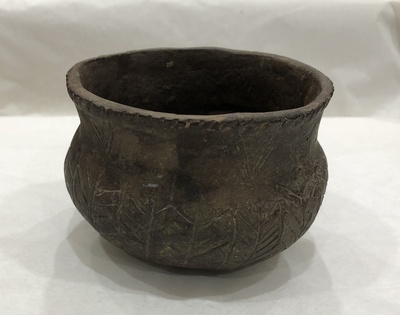 This jar, made from a standard, shell-tempered Mississippi Plain paste, belongs to a type of Mississippian vessels known as Barton Incised, var. Kent. Although somewhat smaller than the typical Barton Incised jar, this shape - known as a standard Mississippian jar - is by far the most common vessel form among Barton Incised pieces. The Barton Incised classification is earned by the almost triangular incised decoration just visible on the neck of the jar. The vertical and herringbone pattern incised decoration covering the jar’s shoulders and body identifies the piece as belonging specifically to the Kent variation. The treatment of the lip is also noteworthy: the notched decoration along the rim of this jar is somewhat unusual among Barton Incised pieces, appearing most often among examples that are uncovered in the Memphis-area specifically. This suggests that this piece, which was uncovered here at the site of Chucalissa, was likely produced in the local area, rather than imported from another site / region.