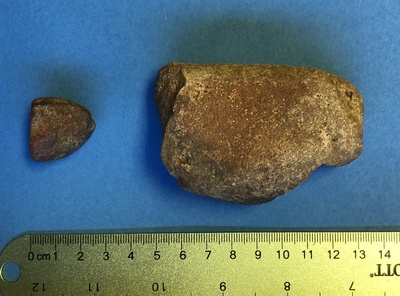 Abraders were used in the process of making stone tools such as projectile points, knives, celts, and ax heads, and while some abraders were made from things like repurposed pot sheds, it appears that the majority of them were made from a rough, gritty stone like sandstone, for example. As the name abrader implies, these tools were used to grind down and polish the blades and edges of the stone tool / weapon being produced. To do this, the abrader itself would be held motionless against a relatively flat surface and the polished stone tool itself would then be rubbed against the abrader, a process which inevitably leaves grooves of various depths and widths on the surface of the abrader. In fact, it is the presence of these grooves specifically that distinguishes abraders from a similar stone tool known a a hone (which was also used to grind / polish stone tools and shows wear patters to that effect, but which was apparently only used to polish flat surfaces, rather than blade edges).