The Government is Man's Work: The Anti-Suffragists 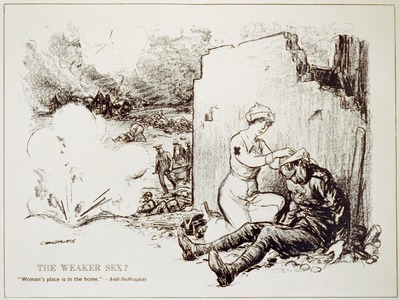 Cartoon of a woman dressed as a nurse tending to a wounded solider on the battlefield. The caption below reads, "The weaker sex? 'Woman's place is in the home' -- Anti-Suffragists." A popular argument for denying women the right to suffrage was that they were weaker and meeker than men. By the time of the Susan B. Anthony amendment, women in America had contributed to numerous wars, include the First World War that concluded in 1918. This cartoon was used in the exhibit, "Suffrage first: Tennessee and Women's Right to Vote." For the original record click https://www.loc.gov/resource/cph.3b49092/ .

"Cartoon, "The Weaker Sex?"" (2021). The Government is Man's Work: The Anti-Suffragists. 4.
https://digitalcommons.memphis.edu/speccoll-exhibit-suffrage2020-doc3/4