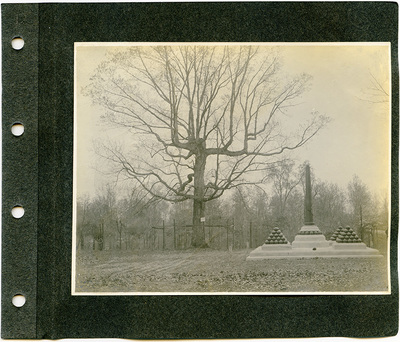 One of five unique mortuary monuments honoring a fallen officer, Shiloh National Military Park, Tennessee, circa 1904. Although it is unclear which officer this monument honors, each monument of this type consists of a concrete base with 4 small pyramids of deactivated 8" cannon balls and an upright tube of a 30 Pounder Parrot Rifle. A bronze plaque with information about each officer is mounted on the cannon barrel between the trunnions. A. Frank Eby, born 1844 in Franklin County, Pennsylvania, served in the 54th Indiana Volunteer Infantry and the 40th Indiana Infantry during the American Civil War. After the war, he was a grocer, a teacher and later settled into the banking and mercantile industries in Elk, Kansas, where he married and raised his family.