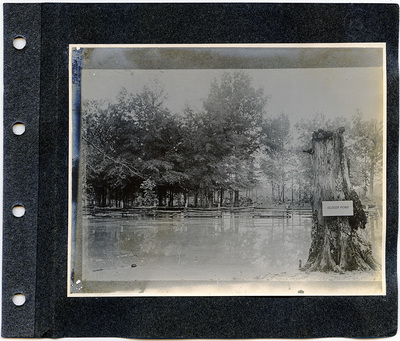 The Bloody Pond, Shiloh National Military Park, Tennessee, circa 1904. During the Battle of Shiloh, soldiers of both sides came here to drink and bathe their wounds. Both men and horses died in the pond, their blood staining the water a dark red, thus giving the pond its name. A. Frank Eby, born 1844 in Franklin County, Pennsylvania, served in the 54th Indiana Volunteer Infantry and the 40th Indiana Infantry during the American Civil War. After the war, he was a grocer, a teacher and later settled into the banking and mercantile industries in Elk, Kansas, where he married and raised his family.