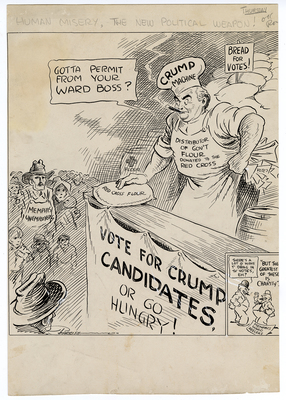 Cartoon drawn by Joseph L. Parrish (1905-1989) of the Nashville "Tennessean" in 1932 showing a man, representing Memphis political boss E.H. Crump, with bags of Red Cross flour looking at a group of destitute people labeled "Memphis unemployed". The flour has a sign stuck into it saying "Bread for votes!". The man has a hat which has "Crump machine" written on it and wears an apron reading "Distributor of gov't flour donated to the Red Cross" with pieces of paper labeled "votes" sticking out of his pocket. He is standing in front of a counter with a sign tacked to it reading "Vote for Crump candidates, or go hungry!" and says to the people "Gotta permit from your ward boss?" An inset has two men labeled as "Memphis ward heelers". One says: "There's a lot of ways t' drag in th' votes, eh?" to which the other replies: "But the greatest of these is charity." The cartoon is titled in pencil at the top: "Human misery, the new political weapon!" and was based on an accusation by Idaho Senator William E. Borah that the Crump machine was trading Red Cross flour for votes.