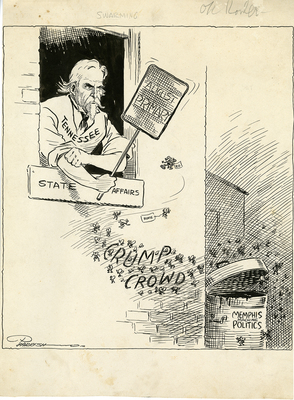 Cartoon drawn by Joseph L. Parrish (1905-1989) of the Nashville "Tennessean" in 1932 showing a goateed man labeled "Tennessee" with a fly swatter with the words "August primary" printed on it, leaning out a building window labeled "state affairs" preparing to swat a swarm of flies emerging from a thrash can with the words "Memphis machine politics" written on it. One of the flies is named "Ed", representing Memphis political boss E.H. Crump, while another is named "Roxie" for Frank Rice, Crump's second-in-command. At the top of the cartoon the word "Swarming" is written in pencil. The "Tennessean" was opposed to Crump's candidate in the Democratic gubernatorial primary in 1932.