Joseph L. Parrish, Tennessee should be allowed to speak!, 1932 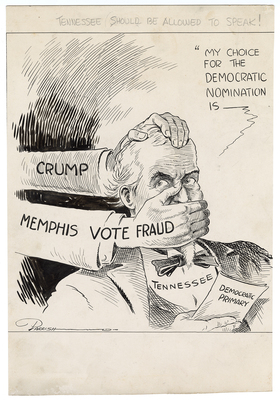 Cartoon drawn by Joseph L. Parrish (1905-1989) of the Nashville "Tennessean" in 1932 showing two arms labeled "Crump" and "Memphis vote fraud" reaching out to hold and gag a goateed man labeled "Tennessee" who is prevented from finishing the sentence: "My choice for the Democratic nomination is____". Colonel Tennessee is holding a piece of paper labeled "Democratic primary". The cartoon is titled at the top "Tennessee Should be Allowed To Speak!". The opponents of Crump's candidate, Hill McAlister, in the 1932 Democratic gubernatorial primary were accusing the Shelby County machine of electoral fraud even before McAlister won the primary. McAlister was successful in the general election defeating the Republican and Independent candidates.