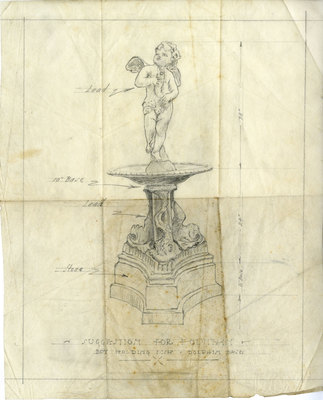 A drawing of a fountain by architect and landscape designer Bryant Fleming. The fountain features a cherub holding a fish standing in a bowl atop three dolphins and was to be constructed of lead and stone. John Wright Johnson built several of Fleming's houses. It is unknown which house this fountain was designed for. Bryant Fleming (1877-1946) was a Buffalo, New York-born architect and landscape architect. He graduated from Cornell University in 1901, where he studied horticulture, architecture, architectural history, and art. In 1904, Fleming became the first lecturer in landscape art in the Department of Landscape Art at the College of Agriculture at Cornell. He served as head of the department from 1906–1915 and in 1925 was appointed as University Landscape Advisor to Cornell. In 1904 he established a private practice named Townsend and Fleming (1904–1915). For 30 years Fleming and his associates had an extensive residential design practice all over the country, including estates in Nashville, Tennessee, and mansions in Memphis.