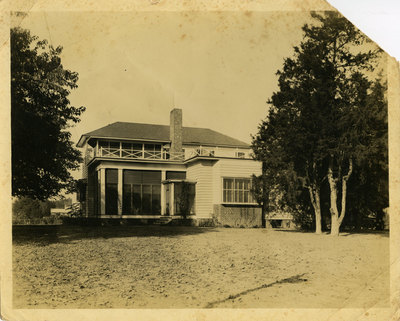 Undated view of the Robert M. Carrier house in Sardis, Mississippi, and its screened porch. In 1904, Robert M. Carrier bought an interest in C.M. Carrier and Company which owned a sawmill in Sardis and timberland in Panola and Quitman Counties. A year later, Carrier owned the company and its name became Carrier Lumber & Manufacturing Company. The company owned the Sardis & Delta Railroad, a 28-mile line from Sardis southwest to Red Gum. By 1917 the mill capacity had increased to 75,000 feet per day and a large logging camp was built at Lake Carrier, 21 miles from Sardis. By the late 1920s the company was close to cutting out the bulk of their timber holdings and in late 1928 the sawmill shut down. The sawmill was reopened on a smaller scale in November 1929 under new ownership as the Carrier Lumber Company and continued to operate until July 1936.