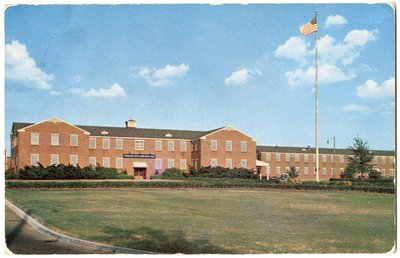 View of Kennedy Hospital in Memphis, Tennessee, around 1950. The hospital was named after Brigadier General James M. Kennedy, a distinguished Army surgeon, and opened in January 1943. It grew to be the largest Army general hospital in the country during World War II. In its first year, over 10,000 wounded soldiers were treated, initially transported by train and then by air the following year. Later it became a Veterans Affairs Hospital before closing in 1967 when the site became the South Campus of Memphis State University.