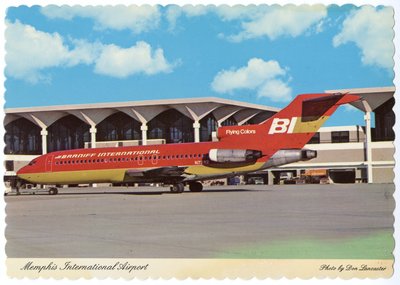 Memphis International Airport, Memphis, Tennessee, and a Braniff International Boeing 727 airplane, circa 1974. Memphis airport opened in 1929. The current terminal was designed by Mann & Harrover and opened on June 7, 1963. The terminal was expanded in 1974, adding two new concourses and extending the others, which were designed by Roy P. Harrover & Associates. Braniff operated as an airline between 1948 and 1982.