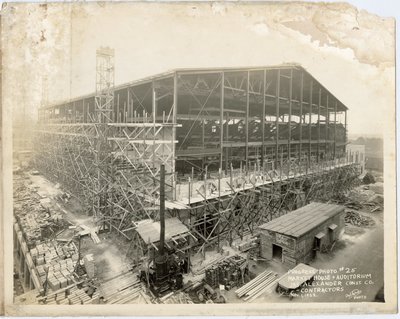 A progress photograph (#25) of the Auditorium and Market House under construction in Memphis, Tennessee, taken on November 1, 1923. The building was being constructed by the James Alexander Construction Company which hired Clifford Poland to take a series of photographs documenting the building's progress. The Auditorium was designed by George Awsumb and was built on the corner of Polar Avenue and Front Street. It offered 30,000 square feet of display space and could seat 12,000 people. Renamed the Ellis Auditorium in the early 1930s, the building was remodeled in 1956-1957 and a new entrance added in the early 1960s. The Auditorium was demolished in 1999 to make way for an expanded Cook Convention Center.