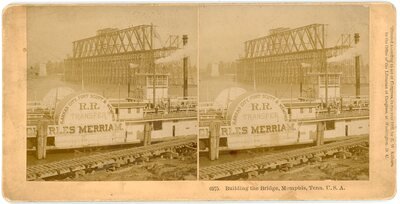 Image titled "6975. Building the Bridge, Memphis, Tenn., U.S.A." published by B.W. Kilburn, Littleton, N.H., in 1892. It shows the Kansas City, Fort Scott and Memphis Railway transfer steamer "Charles Merriam" moored at the Memphis riverfront in the foreground and the Great Bridge under construction across the Mississippi River in the background.

The bridge, known later as the Memphis Bridge and then the Frisco Bridge, opened in 1892 for the use of the Kansas City, Fort Scott and Memphis Railway and was the only bridge across the Mississippi River south of St. Louis at that time. Pedestrians, buggies, and, later, automobiles used it before the Harahan Bridge opened in 1916.