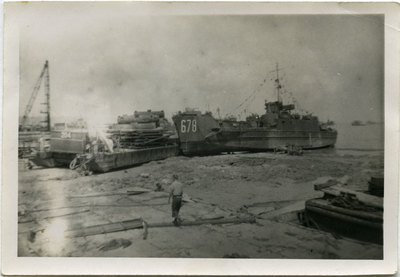 USS LCI (L)-678 grounded at Buckner Bay, Okinawa, Japan, following Typhoon Louise in October 1945. The image was taken by a USS Typhon (ARL-28) crewman. On October 4, 1945, a typhoon was spotted developing in the Caroline Islands and tracked as it moved on a predictable course to the northwest. Although expected to pass into the East China Sea north of Taiwan on October 8, the storm unexpectedly veered north toward Okinawa. That evening the storm slowed down and, just as it approached Okinawa, began to greatly increase in intensity. The sudden shift of the storm caught many ships and small craft in the constricted waters of Buckner Bay (Nakagusuku Wan) and they were unable to escape to sea. On October 9, when the storm passed over the island, winds of 80 knots (92 miles per hour) and 30-35 foot waves battered the ships and craft in the bay and tore into the quonset huts and buildings ashore. A total of 12 ships and craft were sunk, 222 grounded, and 32 severely damaged. Personnel casualties were 36 killed, 47 missing, and 100 seriously injured. Almost all the food, medical supplies and other stores were destroyed, over 80% of all housing and buildings knocked down, and all the military installations on the island were temporarily out of action. Over 60 planes were damaged as well, though most were repairable. Although new supplies had been brought to the island by this time, and emergency mess halls and sleeping quarters built for all hands, the scale of the damage was still very large. If the war had not ended on September 2, this damage, especially the grounding and damage to 107 amphibious craft (including the wrecking of four tank landing ships, two medium landing ships, a gunboat, and two infantry landing craft) would likely have seriously impacted the planned invasion of Japan (Operation Olympic).