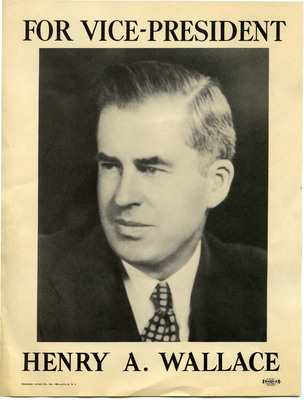 Poster of the Democratic Party issued during the 1940 U.S. presidential election campaign featuring a portrait of vice-presidential candidate Henry Wallace and the text: "For Vice-President Henry A. Wallace." The poster was produced by the Sweeny Lithograph Company, Inc. of Belleville, New Jersey. Wallace (1888-1965) was Secretary of Agriculture from 1933 to 1940 before accepting the nomination for vice-president. He served one term and was replaced by Harry S Truman for the 1944 election by Roosevelt. Wallace then served as Secretary of Commerce from 1945 to 1946. He ran against Truman as the Progressive candidate for president in the 1948 election.