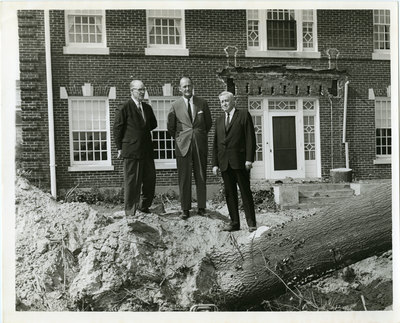 Ernest C. Ball (Tennessee Board of Education)(left), Memphis State University president Dr. Cecil C. Humphreys, and former president J. Millard Smith (right), standing near the soon-to-be demolished President's House on Patterson Street, survey excavations for the new Humanities Building (later named Patterson Hall) in August 1966. The cut-down tree was planted by a former president in 1924. Ball was a student at the university when it first opened in 1912. Smith lived in the house from 1946 to 1960, and Humphreys from 1960 until moving to a new president's residence off-campus on Grandview Drive.