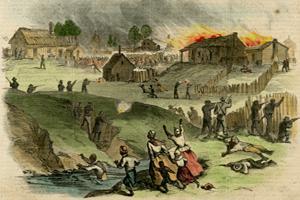 On May 1-2, 1866, Memphis, Tennessee, suffered the worst racial conflict in its history, now known as the Memphis Massacre. Forty-six Blacks and two Whites died during those two days, with many more injured and scores of houses, churches and schools destroyed by fire. The ensuing Congressional investigation led to a report that helped pass the Fourteenth Amendment of the Constitution making all ex-slaves citizens of the United States.