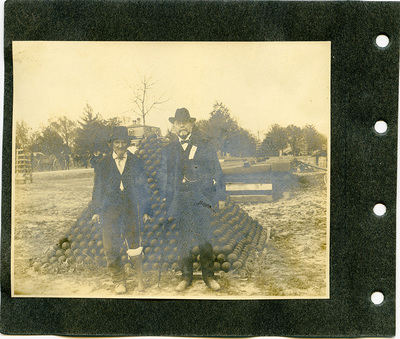 A.Frank Eby (right) and an unidentified man standing in front of a monument pyramid of 8" shells. Monuments of this type mark the locations of Army division headquarters, however the specific division for this monument is unknown. Shiloh National Military Park, circa 1904. Eby, born 1844 in Franklin County, Pennsylvania, served in the 54th Indiana Volunteer Infantry and the 40th Indiana Infantry during the American Civil War. After the war, he was a grocer, a teacher and later settled into the banking and mercantile industries in Elk, Kansas, where he married and raised his family.