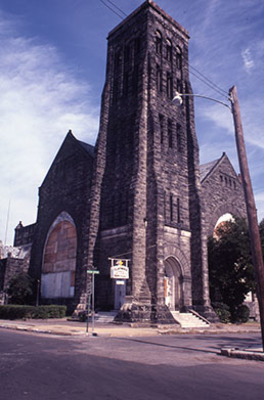 View of Clayborn Temple on the corner of Hernando and Pontotoc Streets in Memphis, Tennessee, 1979. Originally Second Presbyterian Church built in 1893, it became Clayborn Temple in 1949 when it was sold to the African Methodist Episcopal Church. An important center of Memphis' civil rights movement, the Temple was the organizing headquarters of the sanitation workers' strike in 1968. The upkeep of the building became hard to manage as the congregation shrank and it was vacated. Restoration began in 2015.