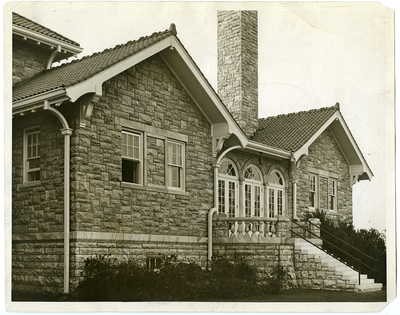 The Little Theatre at the Pink Palace in Memphis, Tennessee, in December 1929. The Little Theatre was the result of an idea bantered about among a group of friends during the 1920 holiday season. Five months later, the very first performance took place on May 20, 1921 as a series of three one-act plays. By 1925, the theater had found its first permanent housing in the stables of the Woodruff-Fontaine House in Victorian Village. Four years later the theater moved to the east wing of the Pink Palace where a 272-seat theater was built on the sloping concrete of the never-used indoor swimming pool of the unfinished mansion. The Little Theatre later became Theatre Memphis. Back in May 1922, Clarence Saunders, the founder of the Piggly Wiggly grocery chain, announced he was planning a large house on Central Avenue which he named "Cla-Le-Clare" after his three children. Because of the pink marble on its exterior it was dubbed the "Pink Palace" by locals. Unfortunately, Saunders never lived in the house before he lost his business the following year and the house and estate were sold to a development company. The mansion was donated to the city and the Memphis Museum of Natural History and Industrial Arts opened there in March 1930.

This Item is protected by copyright and/or related rights. You are free to use this Item in any way that is permitted by the copyright and related rights legislation that applies to your use. For other uses you need to obtain permission from the rights-holder(s).