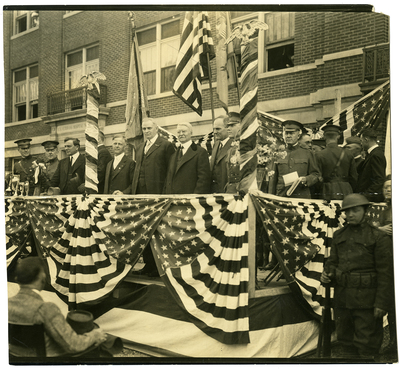 Dedication ceremony of U.S. Veterans Bureau Hospital No. 88 at 1025 Lamar Avenue (later E.H. Crump Boulevard), Memphis, Tennessee, in November 1922. In 1890, wealthy Memphian W.B. Mallory built a stately home at the site which was purchased in 1914 by First Methodist Church to “be adapted to Hospital purposes.” Five years later the cornerstone was laid for a much larger building, “for the use mainly of the indigent sick,” while the original home would be used as a residence for nurses. The new six-story hospital with five-story wings opened on Nov. 1, 1921 but was “gallantly” sold to the United States Veterans Bureau less than a year later to serve the needs of disabled veterans. Additions were constructed in 1925, 1928 and 1931. Kennedy Military Hospital was constructed on Getwell Road during World War II and became a Veterans Administration hospital in 1946, and in 1947 the hospital on Crump was designated a tuberculosis facility, and in 1957 a teaching hospital. In 1962 after extensive renovations “old No. 88” became the Lamar Unit of Baptist Hospital, treating chronic disease. It later specialized in rehabilitation, but the inpatient facility was closed in 1992 and the outpatient in 1996. The City of Memphis declined Baptist’s offer to donate it to the city, so it was given to Mission Corps International to use as a homeless shelter. It was demolished in 2007.

This Item is protected by copyright and/or related rights. You are free to use this Item in any way that is permitted by the copyright and related rights legislation that applies to your use. For other uses you need to obtain permission from the rights-holder(s).