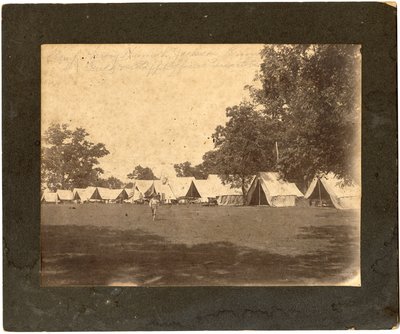 View of Camp Harvey Hannah near Jackson, Tennessee, around 1898, established by the 2nd Infantry Regiment of the Tennessee National Guard. One of four regiments organized in response to the Spanish-American War, the 2nd Regiment was composed mainly of West Tennessee volunteers. The regiment was mustered in at Nashville in May 1898 and mustered out at Columbia, South Carolina, in February 1899, having not served outside the United States.