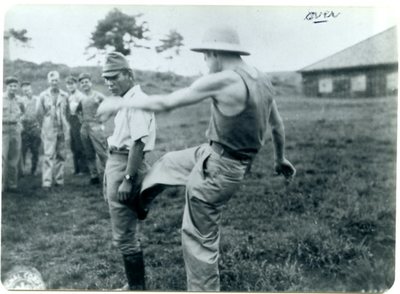 Recently-freed prisoner of war Lt. Jack Gates kicks a Japanese guard at Rokuroshi camp in September 1945. Gates noted in his diary that the guard had physically abused him recently. It seems that the American captain in charge of the recovery team promoted this event, for which Gates got into trouble with the camp commander, Colonel Unruh. Gates' daughter remembered that her father later expressed regret for being goaded into this act of revenge. Copy of a U.S. Army Signal Corps photograph.