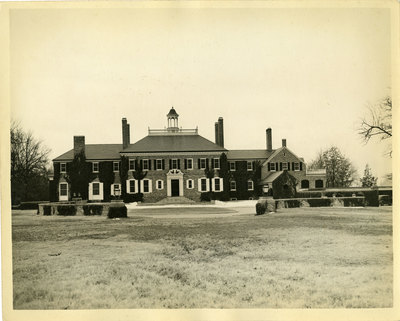 An undated view of the north side of the house at 1000 Cherry Road, Memphis, built for C. Leroy King, Sr., by John Wright Johnson on the "Kingsland" estate. Cecil Leroy King, Sr.(1882-1953) made his money as head of the southern division of the J.R. Watkins Company. The house at "Kingsland" was designed by Bryant Fleming and built by Johnson between 1931 and 1933. It is estimated that it took 250 workmen and several European artisans to construct at a cost of $300,000. The home had 34 rooms including 14 bedrooms and 13 bathrooms, a ballroom, sunroom, liquor vault and a gymnasium in the basement. A $3,000 chandelier hung in the dining room and the house featured solid mahogany doors and rich furnishings. Each of the four family bedrooms on the second floor had its own dressing room and marble bath. The house originally sat on 160 acres and the grounds included a mile-long racetrack and stables. In 1952, Memphis Christian School, now Harding Academy, bought 60 acres of the estate and Harding University Graduate School of Religion moved into the house. The rest of the estate became a subdivision, part of which is known as Kings Park.