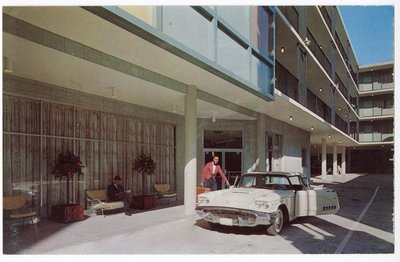 Exterior view of The Downtowner Motor Hotel at 160 Union Avenue in Memphis, Tennessee, circa 1960. It later became the Benchmark Hotel and was partially demolished after it closed in 2010. The Downtowner Corporation was founded in 1958 in Memphis, and built and operated all of its own motels. Every Downtowner Motor Inn was located downtown and offered a no-frills, cheap place to stay. The Downtowner locations were strategically placed near a large hotel or convention center in hopes that business would spill over in their direction. The Rowntowner Motor Inn brand was introduced in 1967 to designate locations more in the suburbs than downtown. As inner cities declined so did business for the company. It was sold to Aetna Life and Casualty Insurance in 1971 and sold again the next year to Perkins Pancake House. The company’s headquarters moved west. In 1973 the company was sold again for a third time and two years later a fourth time. Twenty-plus locations remained open through the eighties when the company was sold yet again for a fifth and final time. By 1993 there were only two locations left and they did not last.