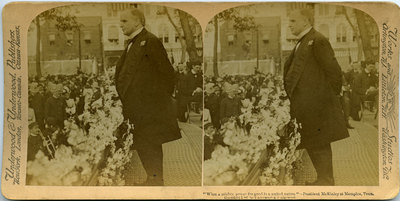 President William McKinley speaking to a crowd in Court Square, Memphis, Tennessee, on April 30, 1901. McKinley was touring the United States by train and stayed in Memphis for one day, attending a reception at the Nineteenth Century Club and dinner at the Peabody Hotel. The stereoscopic card was published by Underwood and Underwood, New York. Three other images taken at slightly different times during the speech can be viewed.