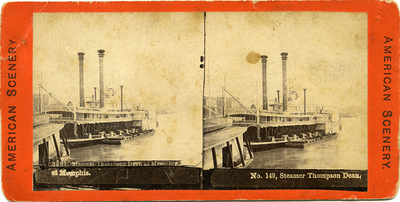 Card is titled “No. 149 (3427) Steamer Thompson Dean at Memphis”. “American Scenery” series, no publisher or date. The Mississippi River side-wheel packet “Thompson Dean”, the second steamer of that name, was built in Cincinnati in 1872. Named for one of the boat's owners, the “Thompson Dean” cost $180,000 to build and furnish. Considered one of the finest steamboats of its day, it received a gold medal at the Cincinnati Industrial Exposition. During the winter months, the “Thompson Dean” ran between St. Louis and New Orleans, while the rest of the year it traveled between Cincinnati and New Orleans. In 1882, the boat’s cabin and engines were transferred to a new hull and it became the side-wheel packet “Will S. Hays”.