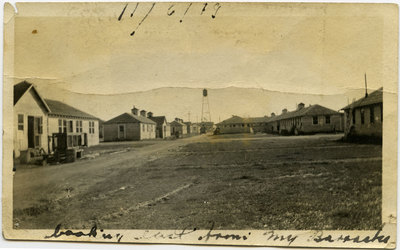 View of buildings at Park Field, Millington. The note on the image, written by the unknown photographer, reads: "looking east from my Barracks" and is dated November 6, 1919. Park Field was one of thirty-two Air Service training camps established after the United States entered World War I in April 1917. This site was originally established by the Army Signal Corps, which managed Army aviation in its early days, in May 1917. Park Field covered over 700 acres and could accommodate up to 1,000 personnel, and served as a base for flight training for the United States Army Air Service. By February 1918, flight operations were in full swing, but with the sudden end of World War I in November 1918, the future operational status of Park Field was uncertain. Cadets in flight training on 11 November 1918 were allowed to complete their training, but no new cadets were assigned to the base. Flight training activities ceased in July 1919 and the field closed in 1922 and was abandoned. United States involvement in World War II resulted in the land being assigned to the Navy in 1942 to become the much expanded Naval Air Station Memphis.