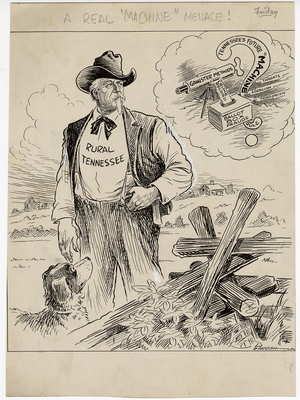 Cartoon drawn by Joseph L. Parrish (1905-1989) of the Nashville "Tennessean" in 1932 showing a goateed man labeled "Rural Tennessee" standing in a field with a dog next to a rail fence, with a house in the background. He looks at a cloud containing a box labeled "ballot box frauds" and a machine gun labeled "gangster methods" fed by ammunition from the box labeled "crime record". The words "threats", "coercion", and "terrorism" are shown next to a large question mark labeled "Tennessee's future "machine" rule". The cartoon is titled at the top in pencil: "A Real "Machine" Menace!". The cartoon refers to the complaints of electoral fraud by opponents of Memphis political boss E.H. Crump's candidate in the 1932 Democratic gubernatorial primary.