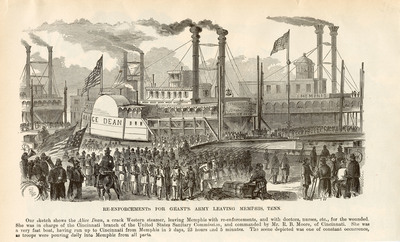 Engraved illustration titled "Re-enforcements for Grant's Army Leaving Memphis, Tenn." published in "Frank Leslie's Illustrated Newspaper", circa 1862. Memphis, Tennessee, was occupied by Union forces on June 6, 1862, and General Ulysses S. Grant arrived in the city on June 23 to become district commander. He then turned his attention to Mississippi and the stretch of the Mississippi River between Vicksburg and Port Hudson that remained in Confederate hands.