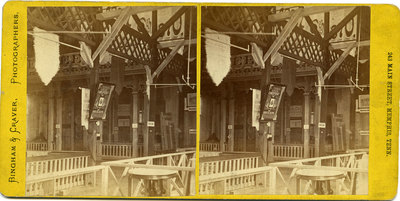 An interior view of the Memphis Exposition Hall, circa 1874. Like many other cities in the nineteenth century, Memphis, Tennessee, held industrial expositions. An Exposition Hall designed by James B. Cook was built on Jefferson and the southwest corner of 4th Street. The first Industrial Exposition opened on October 12, 1872. It was a big success and new exhibitions were held every year through 1888. Although each exposition lasted only one month, the Memphis Exposition Hall was used year-round. After an exposition closed, the hall was used for huge masked balls during Carnival, Christmas, and special occasions. Seats were brought in and the great halls were then used for vaudeville acts and theatre performances and circuses. Conventions were also held there, and toward the end of its life the hall found its perfect use - as a roller skating rink.