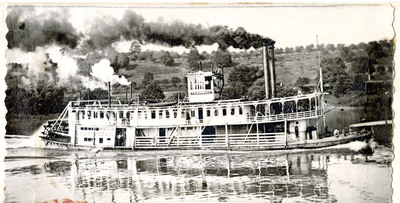 Image of the sternwheeler "T.N. Barnsdall" taken by Captain Jesse. P. Hughes of Cincinnati, Ohio, attached to a Christmas card. There is no information on where and when the photograph was taken. Hughes worked for the Greene Line for many years as a pilot and manager. Built in 1890, the "T.N. Barnsdall" operated on the Ohio River and tributaries in Ohio and West Virginia until she sank in 1904. After being raised, the new owners named the boat "Royal". In 1909 it was renamed "Liberty" and in 1912 its engines went to a new boat also named "Liberty".