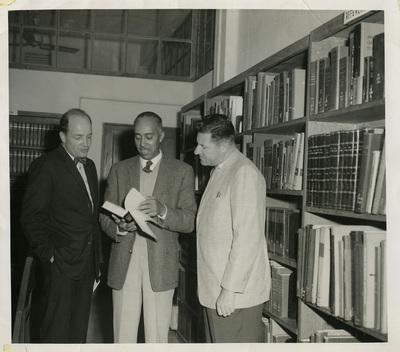 James Alexander Hubert (center) and two unidentified men, undated. Hubert was born in 1906 in Greenville, Mississippi. He received his early education in Memphis and Chicago. He earned his B.A. from Morehouse College, a B.S.L.S. from Hampton, Virginia, a M.S.L.S. from Columbia University, and did graduate work at the Columbia School of Library Services. He worked in college libraries at Virginia State College, Atlanta University and Talladega College. In 1951, he and his family joined the United States Information Service Library in Paris, France, and he later became director. In 1957, he was assigned to Dacca, East Pakistan, and taught for five years at Dacca University. Hulbert retired to Memphis, Tennessee. Along with contributing articles to professional journals, he wrote "An Introduction to Library Service".